Equal pay in US Soccer 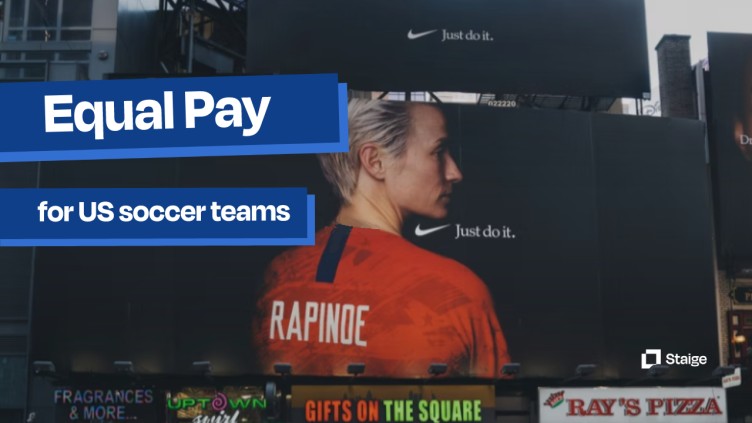 The 18th May 2022 is a “truly historic moment” according to U.S. Soccer President Cindy Parlow Cone. Last Wednesday, the U.S. Soccer Federation announced that it had reached a deal to pay the U.S. Men’s National Team and the U.S. Women’s National Team equally. The deal will run throughout 2028 and includes the equalization of prize money for the upcoming World Cups. Besides prize money, appearance fee for friendly games and bonuses based on the team’s performance are also being equalized. Additionally, the teams will pool their World Cup price money and split the total between both teams and the federation. According to the organization, it is the first time that a federation equalizes World Cup prize money. Previously, the fight over paychecks morphed into a federal lawsuit in which the women accused U.S. Soccer of “institutionalized gender discrimination”. Even though a judge ruled against their core claims in 2020, they eventually won their equal pay victory at the negotiating table, with a final assist from the men’s team. The men’s team opened a pathway to settle the dispute when they privately agreed to share their World Cup earnings that they have traditionally received by merge it with the smaller payments the women received. Throughout the years, the difference in compensation for men and women has been a controversial issue in soccer and the subject of many courtrooms and negotiating sessions.

“We hope that this Agreement and its historic achievements in not only providing for equal pay but also in improving the training and playing environment for national team players will similarly serve as the foundation for continued growth of women’s soccer both in the United States and abroad,” said Becky Sauerbrunn, player on the women’s national team and president of the U.S. Women’s National Team Players Association. “These agreements have changed the game forever here in the United States and have the potential to change the game around the world,” stated Cindy Parlow Cone.

Our commitment to women's soccer

Changing the game and giving teams the necessary equipment is our dedication. Knowing that women’s professional teams are still being neglected and lack the professional equipment they need, we decided to partner up with the DFB. Since last year, we provide a digital solution for the entire second women’s Bundesliga. Thanks to our camera system, all games are now being live-streamed, and coaches have the opportunity to analyse their games with professional tools. “This is a clear, positive statement (and) a big step in the right direction,” said Martina Voss-Tecklenburg, Coach of Germany’s women’s team. All in all, the cooperation is an important step for women’s soccer in Germany.

Still a long way to go

This year has been a great one for women’s football. A structural reorganization of the UEFA’s Women’s Champions League resulted in a more comparable format to the male counterpart. The highly increased interested in this format lead to a new multi-year global broadcast deal with DAZN. The streaming service is broadcasting all 61 for free via YouTube, which granted free access for viewers. This resulted in a significantly higher viewer base and made plenty of rights holder and brand recognize the potential in women’s football. Sky Sports adopted a similar model for the English Women’s Super League.

Additionally, the attendance in the stadiums has also increased accordingly. In this year’s quarterfinal of the Champions League, a record 91.533 fans saw FC Barcelona beat their rivals Real Madrid. If it wasn’t for the pandemic, the Camp Nou most likely would have been sold out. However, this amazing attendance is not the norm yet. The regular weekly attendances in Europe’s top leagues – Germany’s Frauen Bundesliga, England’s Women’s Super League and other – attract only a couple of hundreds. The record for the highest average attendance is also held by FC Barcelona with around 2,500.

Even though there is this huge difference in attendance and viewership between Champions League clashes and average domestic league games, the rising TV revenues will put the demands for equal pay on a stronger footing and offers a chance to for women’s football to gain more attention. On the downside, this commercial model mainly serves the big clubs that are already on top of the pyramid. Personally, we don’t want to neglect our grassroots and amateur teams, which is why we focus on providing those teams the best solution possible.

All those recent changes evoke many new questions. Do you think the DAZN deal with benefit women’s football? Or will it just create another commercial system with the same teams dominating every year, similar to the men’s counterpart? How does the equal pay decision by the U.S. Soccer Federation affect other organizations?

Stay up-to-date with our Newsletter_

Questions?
We will help you_

Make use of our personal contact options free of charge and without obligation.

Talk to our experts

Schedule an appointment and get a personal consultation.

Fill out our contact form and we will get back to you as soon as possible!

Give us a call

We are available from Monday to Friday.

Write us an email

Send your questions to the following address: